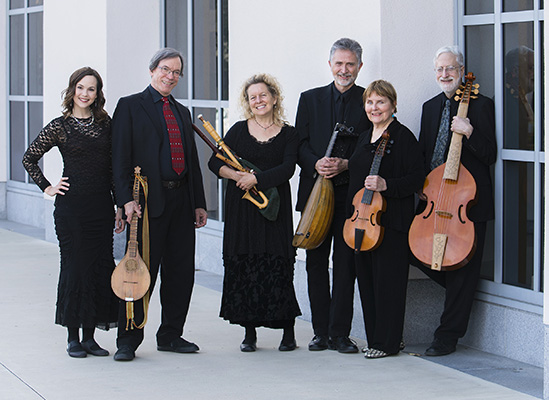 The Baltimore Consort brings magic to music from Shakespeare

I feel a little like the native New Yorker who finally visited the Statue of Liberty—Tuesday night was my long-delayed opportunity to fall under the spell of a local tradition that has for some time enjoyed national recognition. The Madison Early Music Festival’s 17th season is unfolding this week, and Tuesday night the Baltimore Consort wowed a very full Mills Hall. The theme of MEMF this year is the celebration of the 400th anniversary of Shakespeare’s death. The Baltimore Consort’s part was to present song and dances used (or referenced) in the Bard’s plays.

I will confess that I am late to pre-Baroque music in general, although I’ve enjoyed much sacred Renaissance music for most of my life, and have been occasionally immersed in it more in recent years. For that matter, occasional exposure to instrumental music of 1400-1600 I’ve found often more stimulating than your “average” Baroque offering.  But I had yet to experience an ensemble akin to the Baltimore Consort in live performance.

The marriage of venue and performers could not have been better; Mills Hall’s live acoustic and the relative intimacy of the seating resulted in a transparency and delicacy of timbre and balance that was immediately arresting. If sorbet cleanses the palate after heavier food, the Baltimore Consort cleanses the ear after certain outdoor summer musical events.

MEMF’s distinguished guests (back after an appearance a decade ago; they said convincingly that they were thrilled to be back). The group numbers five players: Mary Anne Ballard (treble and bass viols), Mark Cudek (cittern and bass viol), Larry Lipkis (bass viol and sundry winds), Ronn McFarlane (lute), and Mindy Rosenfeld (flutes, fifes, bagpipes and krummhorn). For the vocals they were joined by a wondrous soprano who has joined the Consort a number of times, Danielle Svonavec.

The program unfurled as an imaginative tapestry of instrumental and vocal selection arranged by Shakespeare play, beginning with a pair of works from As You Like It. “Kemp’s Jig” was a perfect table setter, clean and invigorating, followed by one of the few songs known to exist in the version used in Shakespeare’s time, “It was a Lover and his Lass” by Thomas Morley.

Both the program notes and Cudek did a fine job of elucidating the origins and usages of the various numbers (only the lack of printed texts was a disappointment, but understandable—and Svonavec’s diction was as accurate as the oft-tripping tongue-twisting lyrics sometime allowed). A group of four numbers from Twelfth Night followed, and then came a rapturous set of four from Romeo and Juliet. By the time Svonavec concluded “Complain my lute” I feared a lack of superlatives to describe her instrument. Pure, yes, not only unforced but capable of heart-stopping diminuendo; but the phrase that sticks is to say that Svonavec’s voice sounds like it is always in the process of blooming. Instead of flowers being given to her at the end of evening, Svonavec had strewn bouquets of memorable phrases to every corner of Mills Hall.

Svonavec demonstrated even more range—vocal and dramatically—with a startling turn in appropriate garb and timbre in the “Gravedigger’s song” from Hamlet, in the set that opened the second half. Another handful of highlights emerged from the closing sets from The Tempest, Merry Wives of Windsor, Othello, and a final romp full of pranks played as Robin Goodfellow on audience and players alike. The only consolations following one scintillating encore are that the Baltimore Consort has recorded extensively for Dorian—and that there are stil performances of the Madison Early Music Festival through this weekend.