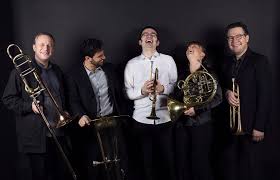 One of the most exciting and steadily growing events of recent years at UW-Madison’s Mead Witter School of Music is the annual Brass Fest. Now in its third season, the two days spent on an October weekend continues to present a wonderful panoply of music too often neglected.

And in the case of this year’s event last weekend, attendees were also introduced to an ensemble new to this country: The Stockholm Chamber Brass (pictured above, courtesy of Beatrice Winter). Bursting upon the European scene in 1988, the quintet now sports a nearly three decade track record that includes six CDs, often eliciting rave reviews from respected sources. On Friday night an enthusiastic gathering at Mills Hall soaked up the potent artistry of trumpeters Tom Poulson and Urban Agnas, horn player Annamia Larsson, trombonist Jonas Bylund and tuba player Sami Al Fakir, all in the midst of their first American tour.

Without any ado, the group launched into the Brass Quintet of Anders Hillborg. After a bracing dozen or so minutes, we learned from Bylund, who is apparently the spokesperson for the group, that the work was written for SCB in 1998. It seemed that Hillborg took on the assignment relishing the opportunity to exploit the various techniques of which the group is capable, rather than structuring a compelling musical argument. Still, the piece was an effective introduction to the warm sound and abundant virtuosity of the group.

Agnas’s own arrangement of three dances from the sixteenth century composer Tielman Susato’s “Dansereye” followed. While little is known of the man who may have come from Belgium and apparently died in Sweden, the dances were light and engaging—and apparently Agnas has a bit of a repressed percussionist inside him, as he managed tambourine and other instruments in his left hand (or his feet) while he held the trumpet in his right.

The end of the first half came with a substantial masterwork, the Quintet No. 3 of Viktor Ewald. The four movements gave each member ample chances to take the spotlight, but better still this is a unified work that bears repeated hearings.

The second half opened with further evidence that Agnas is wrestling with a musical alter ego, as he trumpeted and percussed his way through his arrangemet of the “Tango-Waltz-Ragtime” sequence from Stravinsky’s A Soldier’s Tale. Kudos to Agnas for the arrangement first of all; this is vintage Stravinsky, and a transcription for brass quintet (and percussion) is a fascinating alternative. The original 1918 work is composed for violin, bass, clarinet, bassoon, trumpet, trombone and percussion, so the numbers are close and there is interesting crossover in the orchestration. It can’t be said that all the inflections of the “Tango” emerged as convincingly as in the original, but the Waltz and Ragtime were a triumph.

A literate listener would know that David Felder’s “Canzone XXXI” was inspired by similar works of Gabrieli, but the modern filter applied by Felder was dense and dissonant—no crime in and of itself, but the work lacked a persuasive arch. But the concert concluded with one of the pillars of the genre’s repertoire, Malcolm Arnold’s Brass Quintet. In the first movement, Arnold seemed to pay homage to Benjamin Britten, with a theme based on Britten’s closing section from “The Young Person’s Guide to the Orchestra.” The ensuing Chaconne poured out waves of sound, and the finale gave Fakir a chance to some impressively nimble playing. Here one was left wanting more—more of this music, and certainly more from our Swedish visitors. At least we got the latter, an encore of an arrangement of a Swedish love song. Whoever the composer and whatever the name, it was sweet indeed.

One thought on “Northern Winds That Leave a Warm Feeling”