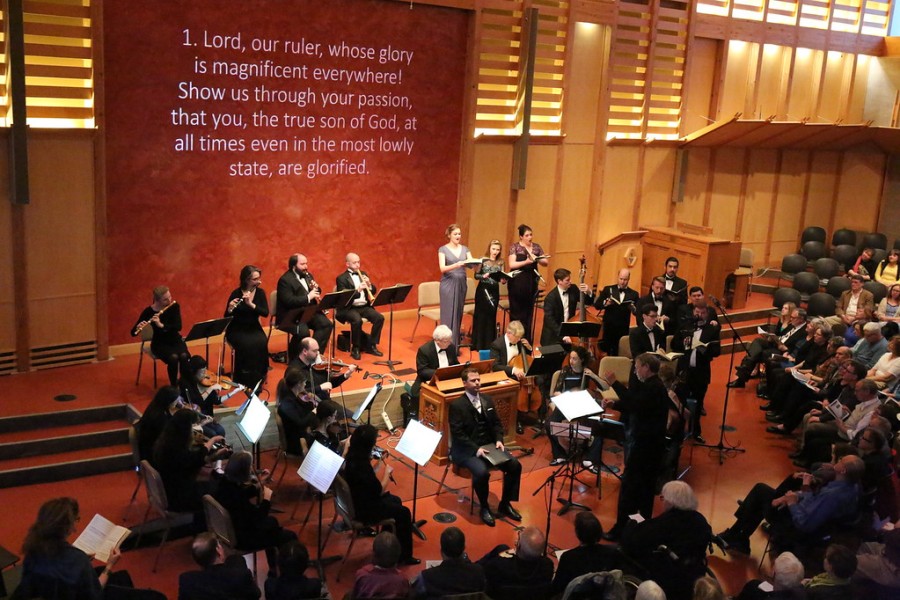 Bach’s “St. John Passion” is revealed in all its poignant splendor

It was over a year ago, when I first experienced the Madison Bach Musicians for the first time (a revelatory Messiah) that I saw they planned performances of J.S.Bach’s “St. John Passion” for Good Friday night and the next in 2017. I was ready to count the days for twelve months…for a time in recent weeks it seemed I might miss both performances, but I was there in the packed Atrium Auditorium of the First Unitarian Society Saturday night, and once again, I will count it not just one of the most memorable performances of this year, but of all my years of concertgoing.

Most of Trevor Stephenson’s preconcert lecture had to be missed, but I did catch enough to hear him make an insightful analogy for modern listeners of Bach’s searing portrayal of the final earthly hours of Jesus Christ. Much in the same way a film director will use different camera angles, perspectives and even character points of view, Bach juxtaposes the parts of the Evangelist and the other characters, the solo arias that give individual emotional responses as the events unfold, and the chorales that lend a congregational reflection.

The standard of performance of course was never going to be in doubt. Stephenson was a subtle musical anchor at a small organ, while Marc Vallon directed the other 16 musicians (of original instruments or more than reasonable facsimiles) and about ten singers.

The Evangelist is the busiest singer of the long work, and Dann Coakwell was a poignant and expressive executor of the part. Richard Ollarsaba, as Jesus, unleashed a rich sound nimbly modulated from commanding to tender. Soprano Alisa Jordheim reminded local listeners again that she is steadily climbing to the highest rungs of artistic achievement.

There were two particularly insightful decisions made by Stephenson (presumably he; if others deserve credit, I apologize): the first was to project the English translations behind the singers (as pictured above, courtesy of Kent Sweitzer). While the German was printed in the program booklet, being able to see the English while watching the performers insured an ongoing emotional connection that is easily broken or distracted by one’s eyes darting from page to performers. It is true that the work is not staged or costumed, but as Stephenson pointed out, this is the closest thing to an opera that Bach produced, and it delivers more narrative and emotional intensity than many a full-blown opera.

The second idea was to close the first half with a short message, delivered by the Reverend Michael Schuler, who has shepherded the flock of the First Unitarian Society these past twenty-nine years. His quarter hour (in Bach’s time, a Lutheran minister would have spent an hour or so elucidating the material) was given to a concise overview of Bach’s work in the context of the Lutheran services (and his bosses) at the time. Schuler also addressed briefly the issues of anti-Semitism, which unfortunately are a result more of post-Resurrection church history than a reflection of what occurred at the Crucifixion.

For a few years before I finally made it a priority to hear MBM myself, their reputation for unsurpassed accuracy and excellence in period performance preceded them. What I now know is that you’re just as likely to receive a spiritual wallop in the bargain. Next season Stephenson and the MBM will sidestep any large religious works in their post-Easter concerts (not that there’s anything wrong with a chance to hear Purcell’s Dido and Aeneas and Bach’s “Coffee” Cantata). But there’s always that Baroque Holiday Concert (December 9). I have a feeling I just won’t be ready for Christmas without it.