DeMain and Zambello recreate a compelling staging of Gershwin’s masterpiece

Cooperstown, NY is probably best known as the home of the Baseball Hall of Fame, but in recent years the Glimmerglass Festival has added an ever-expanding luster to an already attractive region. Three hours or so northwest of New York City, the region takes its name from James Fenimore Cooper’s Leatherstocking Tales, in which he refers to Otsego Lake as “Glimmerglass.” Starting as an unassuming community venture in 1975 with four performances of La Boheme in the local high school, Glimmerglass Opera moved into the Alice Busch Opera Theater in 1987. 1990 marked the first time operas were presented in repertory, and the reputation of the event quickly grew. Celebrated director Francesca Zambello took over as Artistic and General Director before the 2011 season, and, to reflect the expanded activities added to operas, the name was changed to Glimmerglass Festival.

I grew up in White Plains, NY—less than a three-and-half-hour drive from Cooperstown. It has been one of the relatively great ironies of my life that I never made a point of heading up I-87 to visit the Hall of Fame (baseball has always been my favorite sport), and Glimmerglass Opera didn’t really grow up until I was settled (at the time) in Los Angeles. But last week I didn’t hesitate to drive 950 miles from Madison, WI to finally see John DeMain conduct Porgy and Bess live.

I had a good idea of what to expect, as I had reviewed the DVD of the 2009 San Francisco Opera production, also directed by Zambello. But DeMain has a much longer history with the work: For many audiences, and a good number of critics, Porgy wasn’t fully alive until Houston Grand Opera came closer than any previous effort to stage the complete operatic vision in 1976. With the 32-year-old DeMain on the podium not just in Houston, but on the subsequent tour and RCA recording, his career went from promising to light speed: not only did he get a Grammy to put on the mantle, he also made a huge impression on Leonard Bernstein, that set off a fortuitous chain of events for DeMain and Houston Grand Opera.

Flash forward to the present, and DeMain has conducted Porgy and Bess over 350 times, all over the world; he first worked with Zambello in 1984 at HGO, and the relationship has always evidenced great synergy between stagecraft and musical interpretation. In the San Francisco production, Zambello gave a sensitive updating of Catfish Row to about 1950, but otherwise remained true to the Gershwins (George and Ira) and librettists DuBose and Dorothy Heyward.

So I came to my Glimmerglass/Porgy experience at last. It poured rain most of the day of the performance (July 13), and the evening was still warm and humid. The Alice Busch Theater is a stunning venue, an indoor-outdoor structure that is fully covered with sides that can be open, screened or covered if the weather isn’t cooperating. Best of all, it is an intimate house, seating about 950. We sat at ground level, a little more than halfway back, but it is hard to imagine that any seat in the theater is less than wonderful.

But other than getting to know a new venue, the evening provided no major surprises—which was as hoped. DeMain gave his fluid, nuanced reading with an orchestra strong both as an ensemble and in the numerous mini-solo riffs that populate Gershwin’s irresistible score. This was only the second of a scheduled thirteen performances (a fourteenth performance had already been added due to a ticket demand virtually unprecedented in Glimmerglass history), but the orchestral players sensitively responded to everything DeMain asked of them.

Of course this was a different cast than what I had seen on the SF DVD, and there were a couple of real knockouts, starting with the Bess of Talise Trevigne. Aside from a silky soprano that could range from steely to supplicating, Trevigne gave a clinic on character development. In her first appearance with the villainous Crown, she was the definitive brazen woman of more than questionable character, and she seemed to stop just short of singing too hard, etching a portrait of a woman whose potential for indifference could rival her obvious passion for lust and booze. But her transformation to a tender human being chastened by the unconditional love of Porgy looked and sounded completely genuine—as was her later struggles with Crown and Sportin’ Life’s incessant offers of “happy dust.”

Her Porgy was Musa Ngqungwana, and while he did not demonstrate as wide a palette of vocalism, he was imposing physically, making his believable handicap all the more telling. Ngqungwana dragged his left leg and foot consistently and used a crutch, but it was easy to sense his inner spiritual and physical strength (after all, he does manage in the end to kill Crown). And let’s be clear: there was nothing lacking in Ngqungwana’s renditions of “I Got Plenty of Nothin’” and his central duet, “Bess, You Is My Woman Now.”

(Below: Talise Trevigne as Bess and Musa Ngqungwana as Porgy. Photo by Karli Cadel, for The Glimmerglass Festival 2017). 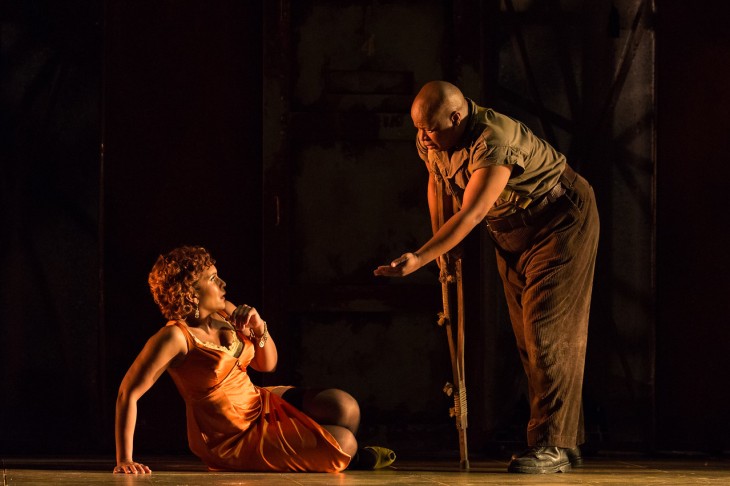 Speaking of physically imposing, the Crown of Norman Garrett was literally a towering presence whenever on stage, with lengthy arms that looked as though they could span Otsego Lake. He has a voice to match, intimidating and sinister.

Like most companies these days, the Glimmerglass Festival offers (since 1988) a Young Artists Program, and this year’s group appears to have a few diamonds already not so rough. Most prominent among these was Simone Z. Paulwell as Serena; when she sang “My Man’s Gone Now,” she received a full ovation before the end of the aria—and a bigger one when it was really over. Meroe Khalia Adeeb and Justin Austin as Clara and Jake, respectively, were funny and poignant as the young couple doomed to orphan their baby in the hurricane.

Frederick Ballentine has the potentially scene-chewing role of Sportin’ Life. He had missed opening night with some vocal distress, but came through on this occasion with a well-calibrated mix of indignant cynicism.

(Below: Talise Trevigne as Bess and Frederick Ballentine as Sportin’ Life in The Glimmerglass Festival 2017 production of Porgy and Bess; photo by Karli Cadel). 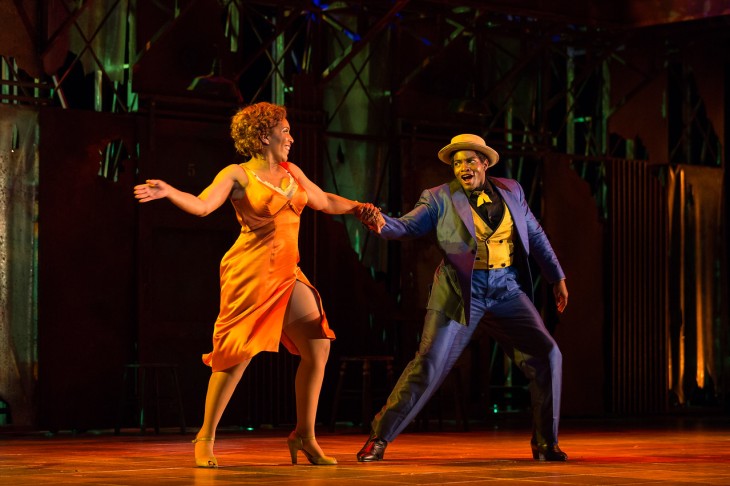 And then there’s the chorus; is there any other opera in which the chorus is so integral not just to the action, but in creating the all-encompassing emotional milieu? In a program book comment, DeMain says that the Russians saw Porgy and Bess as the American Boris Godunov, and that may be the next closest thing to this dynamic. Here is where Zambello works her greatest magic; one of the joys of seeing this work live was to scan with the binoculars to observe the myriad, but completely natural things the chorus players are doing in their multi-storied tenement set. And of course they’d better be able to sing, and they do. We not only got great sweep and tenderness in the hurricane sequence and Robbins’ wake, but a dozen or so chorus members also cover minor roles. In short, we get a real sense of community. (Featured photo at top: The Glimmerglass Festival 2017 production of Porgy and Bess; photo by Karli Cadel).

Aside from the singers new to me, the lighting designer and choreographer were noticeable additions from the SF production. It wasn’t just the hurricane sequence that Mark McCullough was so effective in inducing (fortunately without any additional help from Mother Nature), but gave us nuanced effects throughout. Eric Sean Fogel ensured that everyone—and in the end it is everyone—really danced with a natural exuberance that was often creative and never smacked of cheap allusion to an earlier time based on stereotypes.

So there you have it: A Porgy that’s got plenty of everything, as hoped for. There are seven August performances (and a couple in late July if you’ve read this in time). Of course, tickets are scarce, and then there is that thousand-mile trip. Gee…will DeMain get to 400 performances of Porgy and Bess before we ever get it in Madison? To be fair, there are major casting and cost considerations that make it a tough go here, or it probably would have happened a long time ago. DeMain is already scheduled to conduct it again next summer at Seattle Opera; if he ever gets as close again as Lyric Opera of Chicago or National Opera in Washington, D.C. I think I’ll have to rearrange my work schedule once more. For that matter, I wouldn’t mind seeing something else at the Glimmerglass Festival…or finally getting to that little baseball museum…

3 thoughts on “Porgy Casts a Special Glow over Glimmerglass”