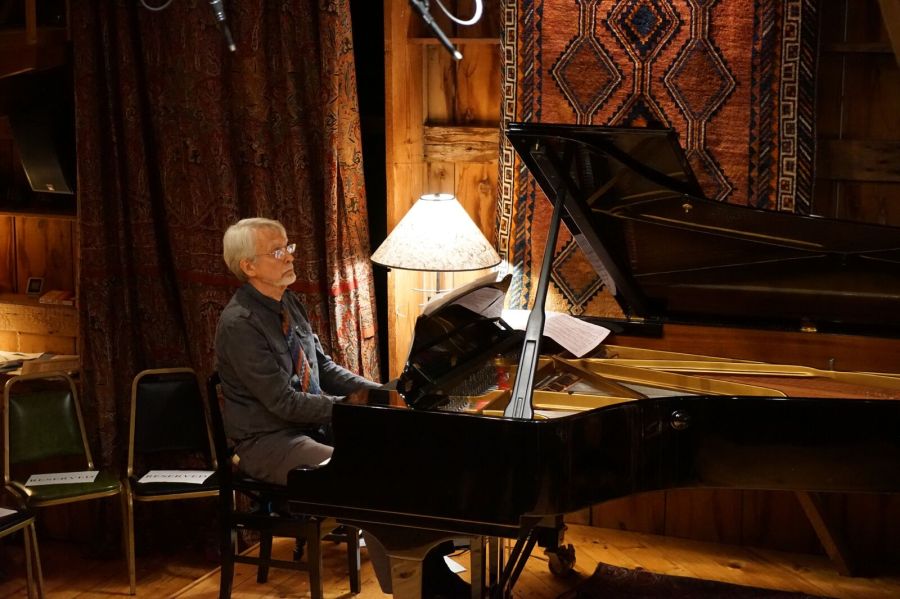 Most everyone gets excited about “kickoffs” this time of year—but before footballs fly across the land, a traditional farewell to summer is kicked off in a lovingly adapted barn on a cherished piece of land just south of Highway 19 and adjacent to one edge of Token Creek County Park. The land of course was the family farm of Rose Mary Harbison, and she and her Pulitzer Prize-winning composer, John Harbison (pictured above, courtesy of TCCMF), have been reaping and sowing artistically there for 28 summers now. This year’s theme of the Token Creek Chamber Music Festival is “Necessary Music”; what might sound like a presumptuous title for a set of three programs is turning out to be, not surprisingly, very much on the mark.

Yours truly missed the opening program, given twice last weekend, which consisted of J.S. Bach and Haydn and a “pre-premiere” by Harbison. The latter’s unprepossessing spirit might preclude him from including his own music under the “necessary” label, but no one could argue against Bach and Haydn.

Particularly interesting though was the chance to read the program’s opening note from the Harbisons, in which they detailed their festival’s origins, and closed with “…we return to the festival’s founding idea: Necessary Music—a season of works that nurture and inspire.”

I certainly didn’t need any convincing about the Wednesday lineup: all Schubert, with a major draw being the last set of songs the 31-year old composer would write. But the first thing we learned was that something else was necessary to the evening, the replacement of scheduled pianist Linda Osborn by Alison d’Amato. She joined keyboard wizard Ya-Fei Chuang for the Andante movement of Schubert’s Sonata in C major for Piano Four Hands. I’ll confess to finding this the least compelling work of the night, but circumstances lent it more than the usual drama: First of course, the late filling in by d’Amato, who paired nicely with Chuang. Secondly was the obbligato accompaniment of an unpredicted thunder storm; fortunately the Barn had already been happily packed as usual by its patrons, prior to Nature’s display of temper.

Chuang took to the keyboard solo for the Moments Musicaux, Op. 94. This is the third time I have experienced Chuang in this venue since 2011; previously she had simply dazzled in repertoire such as Ravel’s La Valse and the two-piano version of Lutoslawski’s “Variations on a Theme of Paganini.” But in these late, soulful six movements (doesn’t Schubert always sing even when he’s writing wordless music?) Chuang demonstrated more subtle masteries, chief among them the sleight of hand gift of making us believe that, even in the most dramatic moments, the piano is not by nature a percussion instrument.

Schubert is given due credit of course for essentially inventing the form of the song cycle and setting the bar incredibly high, with Winterreise and Die Schöne Mullerin. Schwanengesang is a song cycle that isn’t, which is to say that the first 13 songs are to texts by Rellstab and Heine, the last by Siedl. Yet when heard in their original order there seems to be a true and deep connection, albeit not a narrative one.

It doesn’t hurt to have a singer like tenor Charles Blandy bring them to life: His singing was lithe, expressive, and subtly dramatic. There were moments, as in the second song (“Kreigers Ahnung” or “Soldier’s Foreboding”) where he also demonstrated a secure lower range. The most famous of the set, “Serenade,” was a little quicker than these ears are accustomed to, but d’Amato’s lightness in imitating the strumming of a guitar added immeasurably—and the duo built to a wonderfully telling conclusion.

The pair had a gift for finding the unexpected humor as well; “Farewell,” (#7) looks to be serious purely from the perspective of the text, but Schubert fools us with a tongue in cheek setting that Blandy and d’Amato captured beautifully.

Darker moments lay in the second half of the cycle, and by the penultimate song, “Der Doppleganger,” or “Ghostly Double” (perhaps the second most famous of the set) we realize that Schubert is not just lamenting the loss of a true love—but everything about his own tragically short life. Again, extra kudos to d’Amato for rushing in on short notice, and to them both for making it sound as if they had performed this together more than a few times.

After two programs of relatively narrow focus in terms of number of composers, the closing performances this weekend (Saturday at 8 pm and Sunday at 4) run the gamut from Kreisler to Ravel, George Crumb and Schumann. We also get a waltz sequence of Schubert, arranged by Harbison, and after the panoply of waltz perspectives we will have the great Quartet for Piano and Strings by Schumann. I don’t know about you, but I find it necessary to be there.